I have always been fascinated by the mix of modern and traditional culture in Korea and so I thought it would be a great opportunity to apply for an international semester as part of my degree at Cardiff University.

KAIST, or the Korean Advanced Institute of Science and Technology, is one of the top ten ranking universities in Asia. Based in Daejeon, the fifth largest city in South Korea, the university has a reputation for innovative and advanced technology and engineering development.

I applied to go through my university’s civil engineering department, and my studies took place during the first semester of the fourth year of my degree, from September until late December.

Having researched KAIST and discovered the high calibre of the university, I was both nervous and excited to study there, anticipating their approach to civil engineering would be significantly more high tech than I’d previously experienced. 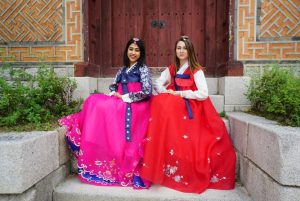 My Korean is minimal, but classes were taught in English and I studied a variety of civil engineering modules with both full-time Korean students and internationals.

I also chose to study more forward-thinking modules such as ‘Ubiquitous Space’, which encompassed the application of modern technology into the engineering world, using Radio Frequency Identification (RFID) tags and artificial intelligence (AI) within the built environment. KAIST is particularly involved in the development of sensory monitoring systems for a range of Korean infrastructure, including bridges and motorways, using some of these advanced systems to monitor structural fatigue, rather than carrying out long-term manual inspections.

One of the many differences between the two countries is that the university has no class on Fridays, so I used long weekends as an opportunity to travel, visiting Taipei, Tokyo, Seoul and Busan. I also visited the Philippines and Malaysia for a well-earned break after my exams.

I really enjoyed being part of such a large group of international students, as KAIST enrols around 300 each semester. This was an invaluable experience in terms of my global awareness, meeting so many people from every continent and spending time with them. It has also prepared me for the variety of people and places I look forward to encountering when I begin my career as a civil engineer.

The education system is very different and made me appreciate more of the quirks of my home university. It was also my first experience of being a minority and understanding the difference this visibility can bring. Korean social norms and culture can be different to European in both substantial and minute ways – it was fascinating to learn about.

Throughout my education I’ve tried to make the most of every opportunity as it arises – including being a Bridge Wardens’ Arkwright Scholar – and this was no exception, I’d recommend every student study abroad if possible.

Now it’s the summer holidays and I’m back in the UK and on an eight-week work placement in Manchester, with Morgan Sindall, before starting the final year of my five-year master’s degree in September.

Click here for more about her early years in university, or here to find out where her scholarship journey began.