You are here: Home » Meet Langdon » The Legend of Langdon the Lion

The Legend of Langdon the Lion

Young Dick Whittington had a mouse infestation and in order to rid himself of these furry pests he bought what he thought was a kitten. In fact he had bought the lion cub Langdon. Dick only realised his mistake when Langdon began to grow into a very big cat. Langdon had over time become a supreme mouse-catcher, and a rather famous one at that! Dick sent him to help his friend the King of Barbary rid his castle of a vermin infestation. Langdon was so successful that Richard II, who was terribly afraid of mice, came to hear of him. In order to ensure that his own castle remained free of mice, Richard II bought the young lion from Dick for a handsome price.

During the winter of 1381, the Rochester Bridge collapsed and needed to be rebuilt. On the completion of the rebuilding of the bridge in 1391, King Richard II decided to cross Rochester Bridge; this was seen as a great honour. There was a grand royal procession and all the most marvellous animals in the kingdom were paraded alongside Richard as he crossed the bridge. But the whole procession came to a sudden halt when a mouse ran in front of the King! Richard was so terrified that he refused to take another step, until Langdon sprang into action, catching the mouse, saving the King and allowing the procession to complete its crossing.

Out of gratitude for the young lion’s service, the King proclaimed Langdon “Guardian of the Bridge”. Ever since that day, Langdon the Lion and his family have guarded the bridge, allowing travellers to cross the bridge free from fear of mice. 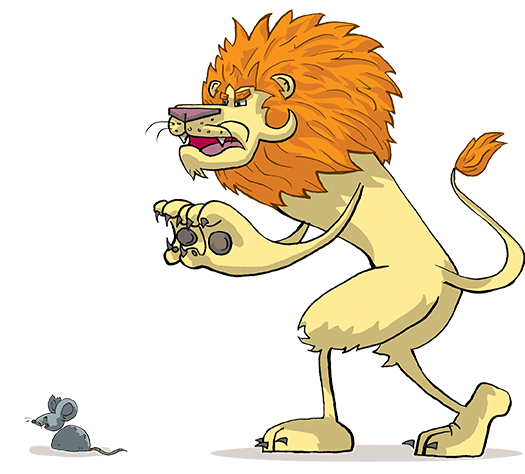